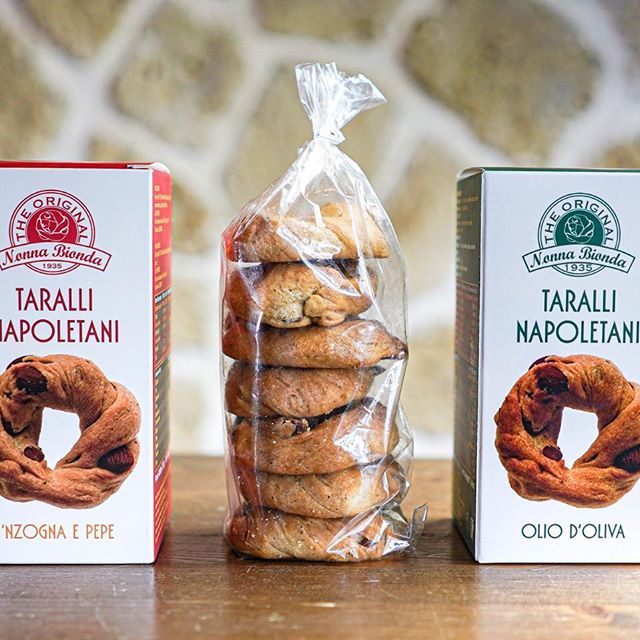 I discovered that Napoli has its own Taralli biscuit. 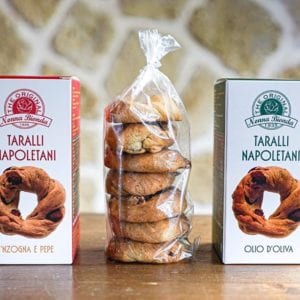 There is a brief moment in the Neapolitan day when the hubbub and frenzy that has characterised the city from its founding, is momentarily becalmed. It’s a golden hour around two o’clock when locals climb back up cool marble staircases to stuffy bedrooms for siesta and when red-faced cruise liner tourists give up on locating the original Pizza Express and return to their berths for a Guinness; when men like me drop off 20-week pregnant girlfriends at little pensiones, to find the nearest bar and quietly break pregnancy promises of prohibition.

It was in this cessation I discovered that Napoli has its own Taralli biscuit. You know the culprit, that little hand formed crumbly toroid you eat handfuls of because they are “probably” healthier than crisps. They are to the 2020’s what Grissini was to the 1990’s. Baked (good), bready (good) and perfect to market towards the aspiring classes for dinner parties as “aperitivi” (probably good). So far, the few brands which have entered the market in the UK, and I name no names as I was previously a poster boy for one of the bigger ones, have done a sterling job of playing on the Pugliese provenance of the product. In fact, if you ate a Taralli you’d be forgiven for thinking Puglia and its drum thumping reputation for bread was the only source of Taralli joy. You, and I were totally wrong. The Pugliese Taralli smacks of the ancient Greek/pre-collapse of Rome basics: wheat, olive oil, white wine and some form of spice, usually either fennel or chilli. The Neapolitan the slightly more Germanic collapse of Rome; “Hello Barbarians!” As it uses pork lard as the main source of fat or “Nzogna” in dialect.

I had seen the Taralli on that trip, skulking in windows of bakers, alimentaris and street food shops but wrote it off in favour of the usual Neapolitan razzle dazzle staples of pizza fritta, tripe, fritella and those paper cones full of fried fish that become nauseous after the third or fourth mouthful. Tarrali has its moment though, a moment in which it gently pushes its way to the front of the culinary crowd and lets you know it’s not a shrinking wallflower reserved for nothing more than the gummy suck of a baby or the slow, gummy nibble of a pensioner.

Its time is when the cheap-o plastic cups of wine start being poured from the hatches, which vie for space against shrines to fading saints, built into every wall in the old town. Hand over a couple of those small Euro-y coins and you will get the magi of Italian wine snacks; peanuts, crisps that taste like they have been dredged through the dead sea and the little ring of flour, strutto, wine and almonds, beloved of the city.

For a moment the humble Taralli can nudge the sinister, avian like face of Pulcinello and his perennial plate of spaghetti to one side. The pizza and pizza fritta await the descent of night and the mottled lengths of tripe dangling in windows amongst bunches of parsley and lemon don’t seem as enticing anymore. The cold glass of wine precariously balanced on the uneven wooden slats of a little picnic table demands the fatty, short mix of crumb and almond. The wine slaking away the residue of Taralli, and the Taralli setting up the mouth for the cold acid tang of cheap 80 cent home brew/wine.

The Taralli has mysterious origins. Just like pizza or pasta, it’s almost impossible to establish, who, when and where it first made its debut on the world food stage. Some sources claim the word Tarallo comes from the ancient Greek Torrere, which means ‘toaster’ and it started to appear around the 7th century. This all smacks of Marco Polo and Seaman spaghetti “discovering pasta in china around the 15th century” to me. I think the likelihood is that as long as bakers made bread, they have traditionally never wasted dough and recycled it to some degree. I remember years back, when I was working in the bakery of one of London’s better Italian restaurants, the head baker saw it as akin to blasphemy if leftover dough was thrown away. It is considered a living organism and Christ-like as it is alive, before dying and then rising again (and then dying in the pit of your stomach acid).

In Napoli, the history of the Taralli began in the fearsome gizzards of the city itself, just around the old port area. It was a part of the city that experienced incredible overcrowding, disease and malnourishment right from its inception, until the19th century when it was Italy’s largest city with half a million souls and Europe’s most overcrowded city (to put it in context in the mid 19th century, London could count around 13,000 people for every square kilometre, while Naples contained around 65,000). Painful, unrelenting poverty was the norm for a lot of the old town’s inhabitants. Many of its inhabitants ate in the streets, buying little dishes for paltry sums of money. Popular amongst these was greasy slices of pizza, fritters made from cabbage stalk and edible leaves, snail and whelks in broth and the Tarrali.

The Taralli really was a bit of a lifesaver for the impoverished classes. It contained carbohydrate, animal fats from the inclusion of “Nzogna” and was traditionally spiced with a little black pepper and finished with almonds, which regularly made their way into the port from the famed groves of Trappani in Sicily. Older generations of Neapolitans would also argue that to truly experience the real character of a Neapolitan Taralli, it is best dunked in seawater; after spending countless hours sat on the Lungo Mare watching the old folk, bodies like wrinkled leather sacks, dip in and out of the bay, I will probably give that one a miss. And you should too.

I’m not sure how many life preserving snacks there are in the world? Innocuous morsels that bridged the gap of poverty to our contemporary 24hour non-stop drinks and nibble culture, but the Neapolitan Taralli is most likely one of the few and best. The next few weeks and months for me, with a baby imminent, will be a whirlwind. Midnight bottle feeds, nappy changes *gulp* and that milky solution that seems to erupt from deep inside them over unsuspecting citizens shoulders. In these moments though I will mentally retreat to those back streets, amongst the dark, brooding tenements that seem to touch the ozone layer and were described by one Swedish visitor in the 19th century as: “The most ghastly human dwellings on the face of the earth”. There I will sit, plastic cup of wine in one hand, fistful of Taralli in the other, sun slowly browning my knees that poke out of the shadow cast by the tenements above.