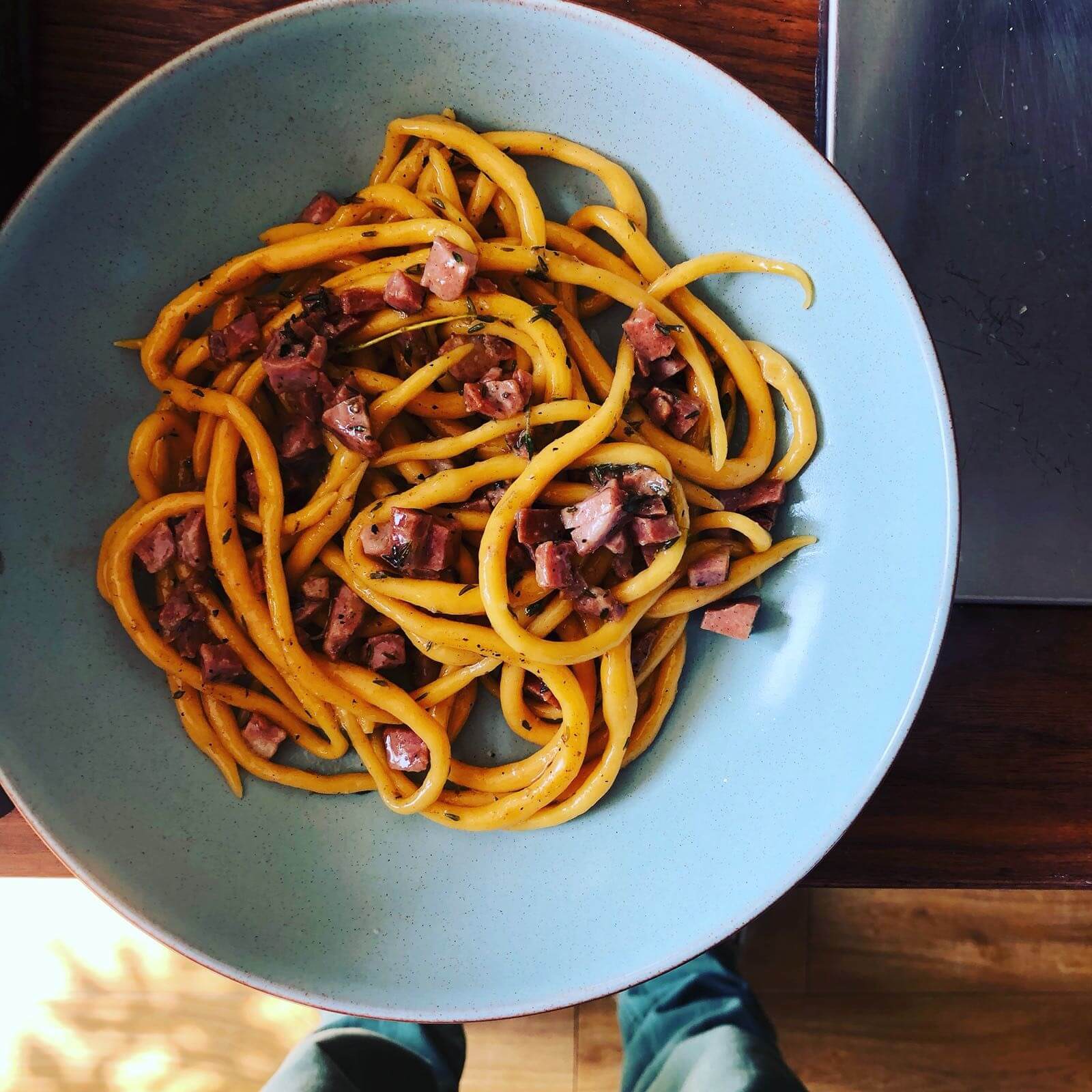 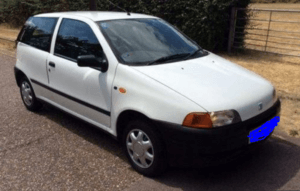 Italian Americans are responsible for all manner of minor, cross-cultural disgraces; Spaghetti and meatballs, chicken parmigaaan and most of the cast of Jersey Shore. However their early experiences in the new world and its seemingly never ending supply of meats, cheese, sweets and booze, left a few hybrid diaspora dishes that could never have happened in the relative poverty of the old country

A couple of years ago I was asked to come up with a dish for BBC Children in Need’s Carfest Festival. It was, I assumed, a simple enough brief; two recipes to fit a 45 minute slot, that was until my PA told me they were looking for some kind of car/automobile twist. Now I like cars; I like how you can wedge yourself firmly into the passengers seat off a Golf and catch a good hours kip, the little illuminated horse that appears on the pavement when you open the door of a mustang, or how a Fiat Punto retains its street cred even when its spent a lifetime taking more of a battering than a sub average boxer. I am not the kind of person however who knows what “Torque” is and always lament the fact that there are no horses actually involved in horsepower. If you show me a top of the range Ferrari, Im most likely to compliment the choice of magic tree.  I had to turn to history to find the perfect dish.

I began with Enzo Ferrari as the man was from Emilia-Romagna and to date, I haven’t met a single sole from the region, who didn’t have anything short of a Paolo and Francesca style love affair for food. Alas, it seemed he lived of Prosciutto and torta fritta whilst he wiled away the hours in his workshop tinkering with carburettors and exhaust pipes . As much as I find the idea of frying square after square of enriched bread dough in hot pig fat about as joyful as waking up to find that my metabolism has  advanced to the pace of a teenage race horse, I didn’t think it would make for much of a show.

In vain I scoured the internet, googling F1 drivers and their favourite foods despite my knowledge of the sport probably being classed as “Junior Scaletrix Level” It turned out that a lot of the icons of the 1970s lived off a heady mixture of booze, late nights and the occasional hit of narcotics, whereas today’s drivers followed a diet similar to that of a Scandinavian racing sardine. Eventually I hit upon the idea of the people who actually build the cars..

Italian car workers were every employers dream in Detroit during the 1920’s. They worked hard, caused little fuss and instead of high wages, safe working environments and discounts on Ford Model T’s, all they demanded was a little macaroni and meat for lunch. Mortadella, that wonderful cylindrical Roman invention of Peppa-pig pink meat, lipid white islands of belly fat and acrid bursts of black pepper corns was cheap to produce and cheap to supply, so became the natural choice to accompany the lunchtime macaroni.

This dish is a simple plate of hand made Pici pasta, a little butter, thyme, finely chopped mortadella, pecorino and a little honey to cut through this thick, fatty mantle that coats the fresh pasta. Pici may seem like a weird choice for the sauce as the mortadella has very little chance of getting a firm hold onto the dough, but the rather nice thing is that each strand is coated in a delicate emulsion of butter infused with the earthy mortadella and accompanying flavours.  What you are left with at the end is a satisfying little pile of buttery meat that slaps you round the face for a slice of bread to make an ad hoc mortadella roley. 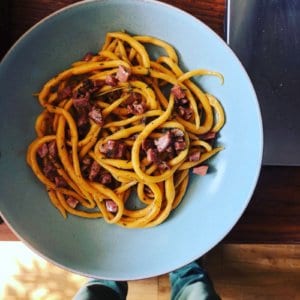 For the dead simple pasta part:

20 Pistachio, shelled and crushed as fine as you can be bothered (30 to make up for the 10 you will invariably eat)

Evoo, Eleusi is great and its from Calabria