The Baba is about as Neapolitan as Maradonna 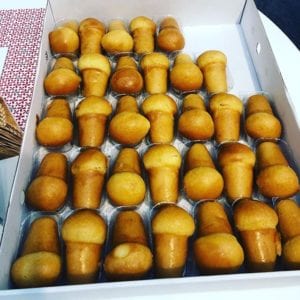 It started with Asterix launching a fist full of magic potion into the noble, patrician nose of Caesar. It was accentuated by Napoleon’s march over the alps and his conquest of the peninsular, before being topped off in 2006 when Zinedine Zidane anointed the chest of Materazzi with his gleaming tete in the world cup final. Almost a millennia of antagonism has existed between the French and Italians, and none more so than in the kitchen, on the pages of cookbooks and in popular food folklore but, the now humble, once royal Baba may be a seminal moment of culinary collaboration between the two tricoloured nations.

If you have ever engaged with Napoli, even on the most basic level of viewing a postcard or some ghastly influencer’s Instagram timeline, it’s hard to not notice a Baba lurking in the background. They are intrinsically linked with the myth of the city, filling counters, bar tops and pasticcerie alongside the other cultural staples of the city: pizza, fritella and petty to severe street crime.

The problem is, that the Baba is about as Neapolitan as Maradonna, though no one seems to acknowledge it or care.

You know when the Italians elevate a dish to one of their own because they immortalise it in miniature fridge magnet form. If you have been to an airport gift shop you will see tiny, perfectly detailed bottles of limoncello, boxes of Barilla spaghetti and even little plastic, shrink-wrapped trays of Mortadella snaking their way up magnetised display stands. Most remarkable though, out of all of this Lilliputian bounty is the actual, baked sponge Baba you find in Napoli, coated in plastic to be observed for eternity in its truest form. Now, without wishing to invite any sudden paroxysm from one of Europe’s most volatile cities, the Baba isn’t actually Neapolitan or Italian. If you knew this already, I would like to apologise immediately for my ignorance. I don’t have a sweet tooth and for years have given it as much thought as Thomas Markle gives his to his personal dignity.

The Baba is a bit like Celine Dion; a bit French but not quite the whole “ooh-la-la pass ze snails Pierre” package. The origins of the Baba probably go beyond France, with some sources claiming that it made its way to Paris via Poland, much like their beloved baguettes probably did. The name itself bears some resemblance to “Babka” which kind of means Old Woman or Grandma. Either way it seems to make its recorded debut in the end of the 18th/middle of the 19th and was made popular by a French chef and patisserie Nicholas Stronher.

The Italians, or more specifically the Neapolitans, have made it their own, transporting it from, in my humble opinion, the kind of thuggish flavour that rum gives the Baba, to the dizzying ziggurat of the super sticky, ultra-violent sweet heights of the limoncello Baba.

The story of how this little enriched dough minaret came to be is really linked to Italy’s love-hate relationship with that old culinary rival and alpine bad neighbour, France.

Italy, and I use the term as more of a geographical expression, went through a bit of an inferiority complex back in the 18th/19th centuries when it came to the French and their cooking. Ridiculous as it seems now as Italian food dominates the globe (come on, how many times do you call out for a Crepe or make a midweek meal of Pot-Au-feu?), back then a slew of French chefs came over the alps at the behest of the house of Savoy to work in the kitchens of the royal court.  This was a period when the old medieval style of cooking, which John Dickie described as a process of “Mixtures”, gave way to a new cuisine of “impregnation”. Traditional cooks and chefs were quickly viewed as slack-jawed simpletons not fit to feed a tongue-less dog, and the top chefs emanating from the culinary capital that Paris was establishing itself as, were sought out by the rich and royal of the Italian peninsular.