Maletti: A True Positive In A World Gone Mad. 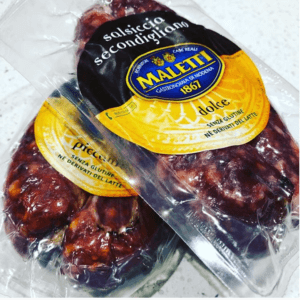 Over the last 8 weeks of lockdown, Ive been constantly reciting a litany of positives that have come about through our national incarceration. There are obvious things that leap to mind; Watching my baby daughter grow and change, spending more time with my girlfriend, granted its usually huddled over a soiled nappy or in the small hours of the morning trying to fit a pipette full of gripe water into a screaming child’s mouth. However aside from the obvious domestic positives, its been a time to linger a bit more over the hob, finish work on a few different recipes that had lingered in my notebooks and start playing around with a few different ingredients that previous to all this malarky, hadn’t been so easy to get, especially in the little red neck paradise I live in. Thankfully though, with Delitalia now delivering to thousands of little homes across the UK, this isn’t so much of an issue, especially when it comes to top quality meats that were previously only really available in restaurants. I am of course talking about Maletti, and most notably, their mortadella…

My girlfriends sister recently told me that the lockdown had caused a problem to their grocery supply lines. She said between her, her husband and the three kids they drink 24 pints of milk a week. I was visibly astonished. She couldn’t believe my surprise, busy families need cups of tea, cereal, bottles, draughts of  milky night time soporific. Milk fuels most families. Of course, the question was bounced back to me; what do we get through more than anything else in a week? Answer, embarrassingly and strangely, Mortadella.

Mortadella powers my little family. Ok clearly the baby isn’t on it, but without it her parents morale wouldn’t be as high, bottles and feeds would be less enthusiastic and story time wouldn’t be such a vaudevillian wheeze. We use mortadella in sandwiches, I drizzle it with a little honey and thyme as part of antipasti, fry it and cut it into cubes to eat with a cocktail stick, chop it into a frittata, mince it and toss it through thick pici pasta or It gets pulped and passed through rich fillings for toretllini and ravioli. Pass the most obvious barrier to employing it, its gnarly fat mottled barbie pink hue, and you have a product exploding with flavour and versatility.

The new range of pre sliced of Maletti meats, which include Bresaola di Punta d’Anca (the really tasty salmon fillet) hot Spianta, prosciutto crudo Italiano, Salame Milano, also has two much overlooked stalwarts of the Italian kitchen; prosciuto cotto (cooked ham) and my beloved mortadella. Not only do these two products sit perfectly on an antipasti board, but unlike the other meats in the range, work widely over a number of dishes. Now that Delitalia are selling the pre sliced packs of Maletti through the home delivery service, my family and yours now have a huge range of dishes that can be cooked out these products. So at the weekend, when I am sat on the astro turf patch I call my lawn, and I am thinking about all the things I have the lockdown to be thankful for, I will look to that pack of mortadella in the fridge, think on the dishes I can make with it and raise my eyes and hands to the sky in thanks.

Tortellini is not nearly as difficult as people suppose. The tricky bit is probably the fold, however there are so many simple ways to do this, unless you are looking for the true Venus navel fold, you don’t have much to worry about. Filling wise, id say as long as you have ricotta or some other soft cheese, parmesan and mortadella you can make pretty much anything. The flavour of mortadella, the fattiness, that hint of myrtle, pepper, cinnamon means its a total flavour booster. All you need to do is blitz it and fold it through

Simply put, this is a Neapolitan dish comprised of some kind of cheese (provalone, mozzarella, scarmoza, fontina, all good) layered with mashed potato, occasionally peas and chopped pieces of mortadella or prosciutto cotto. Top comfort food but also not out of place in fine dining

I basically roll out some pici using a simple pasta dough recipes; heat a pan with a little butter and honey, throw in a handful of finely chopped mortadella and some thyme. Cook this very slowly and then after 3-4 minutes of cooking the pici in boiling water, tossed through. Its sweet, its meaty, fragrant, fatty and very good for what ails you

I am going through a meatloaf phase. After living with a vegetarian for two months I cant think of a better way to get a huge dose of mince. I basically make a meatball recipe (pork, beef, fennel, chilli, bread crumbs, parsley, milk, parmesan) and add lots of chopped mortadella, not too fine though as its quite the humble joy to run into a huge berg of fatty mortadella. The mortadella goes through the meat perfectly, flavouring everything

If you happen to be staggering around Napoli in the early hours of the morning after sampling some of the local plastic cup wine, you are likely to end up face first in a scalding hot deep fried pizza, full of ricotta, fior di latter and some kind of chopped meat. You can recreate this at home really simply with our simple pizza dough recipe, a deep fryer, some ricotta and mortadella

I have noticed our good friend Danilo Cortellini, exec chef at the embassy do this as a canape a few times. I don’t have the exact recipe, but I am assuming its probably a heady mix of mortadella,  cream, parmesan etc. Piped onto a crostini with some ground pistachio sprinkled over , Im sure your post lockdown guests will love it.

Risotto with Beer and Mortadella:

I would never usually order risotto in a restaurant, however when I found myself in the home of Menabrea Beer in Biella, I felt compelled to order this. Biella makes great beer and isnt too far from the Riso Acquerello operation, and the two go together well, especially with lots of mortadella cooked into it